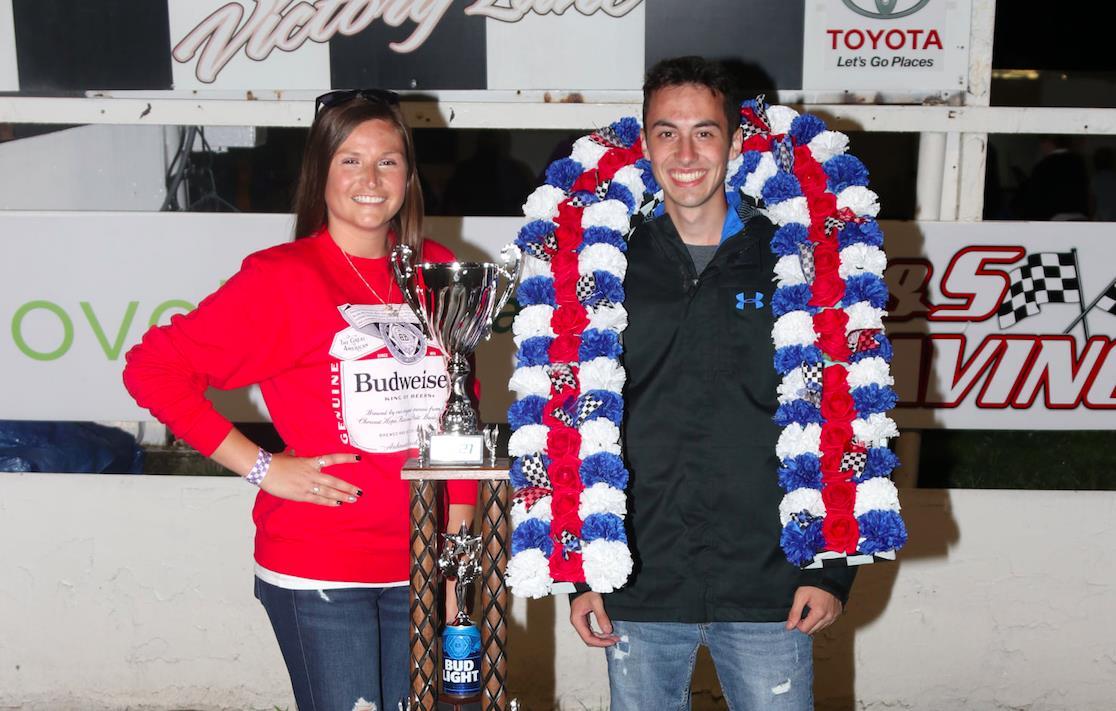 OSWEGO, NY (September 7, 2021) - When Josh Sokolic crossed the finish line in the second position in Sunday afternoon’s Bud Light SBS Classic 75, the 19 year-old from Fulton certainly did not expect that several hours later, he would be declared winner of the 30th annual Classic.

But that is exactly what happened.

After storming out to the early lead in the Pathfinder Bank SBS 75-lap leader, eighth starting Mike Bond was eventually able to storm through the field and take the lead from Sokolic on lap 35 enroute to his sixth straight Classic win.

With Bond disqualfiied, this moved every car in the field up one position, with AJ Bernys and Cameron Rowe now being honored for podium efforts in the Classic, Brad Haynes moving up to fourth, and his brother Bryan cracking another Classic top five.

On the initial start, the eighth and seventh fastest timers; Sokolic and Greg O’Connor lead the way with Sokolic taking over the early lead.

By only five laps in, Bond was in fourth and halfway to the lead, knocking Brown back to fitth ahead of seventh starting track champion Dan Kapuscinski who moved the No. 00 into sixth.

On lap 7, Bond was able to duck underneath former Classic Champion Schartner for the third position and next quickly set his sights on Loden and Sokolic.

Loden was the next car to fall to Bond’s challenges, with the No. 74 machine now into the number two position by lap 15.

Meanwhile, Kapuscinski had worked the low side underneath returning Hall of Famer Brown for fifth.

Despite heavy lapped traffic, for the next 15 laps, Sokolic was able to to keep Bond a distant second, until a caution flag on lap 30.

The yellow was for Loden, who was battling Schartner hard for the third spot. Loden tangled with a slower car, and folded the right front in on the No. 29 ended his day.

With 45 laps remaining, the top five consisted of Sokolic, Bond, Schartner, Brown; who had gone back by Danny K for fifth, and Kapuscinski, who would now move into that five spot.

On the double file restart, Bond snagged the lead away from Sokolic, and it was on this circuit that Brown’s return to Oswego Speedway would end early.

The No. 13 caught the back stretch wall while battling for third, dropping out of the race and moving Kapuscinski into the four spot and allowing rookie Noah Ratcliff to crack the top five.

Kapuscinski applied the pressure on Schartner for third for the next 15 circuits, until mechanical issues dropped the Joe Gosek tribute No. 00 out of the running on lap 45.

Now, with 30 to go, it was Bond, Sokolic, Schartner, Ratcliff, and Bernys the top five.

On lap 50, Bond caught heavy lapped traffic, and struggled to get by a slower car in turn 1, giving Sokolic a peek at the lead.

Sokolic stalked Bond for the lead for the next five laps, but by lap 55, Bond was able to open up a larger advantage over the No. 26.

With 15 laps remaining, the rest of the field caught that heavy traffic and it was Ratcliff who fell victim to a slower car this time, getting up a bit wide in turns three and four, and leaving a hole for Bernys, Cameron Rowe, and the Haynes brothers to bypass him down low.

The 2021 Rookie of the Year fell from fourth to eighth, with Bernys, Rowe, Brad Haynes, and Bryan Haynes inheriting fourth through seventh.

Unfortunately, the misfortune for the top five contenders continued with just 10 laps to go as third place running Schartner had something break on the No. 18, resulting in heavy contact into the third turn foam.

With less than 10 to go, this called for a double file restart, and while Sokolic gave it all he had, was unable to keep up with leader.

Bond went on cross the line in first, but at the end of the day, it was Sokolic the winner ahead of Bernys, Rowe, Brad Haynes, and Bryan Haynes in the top five.