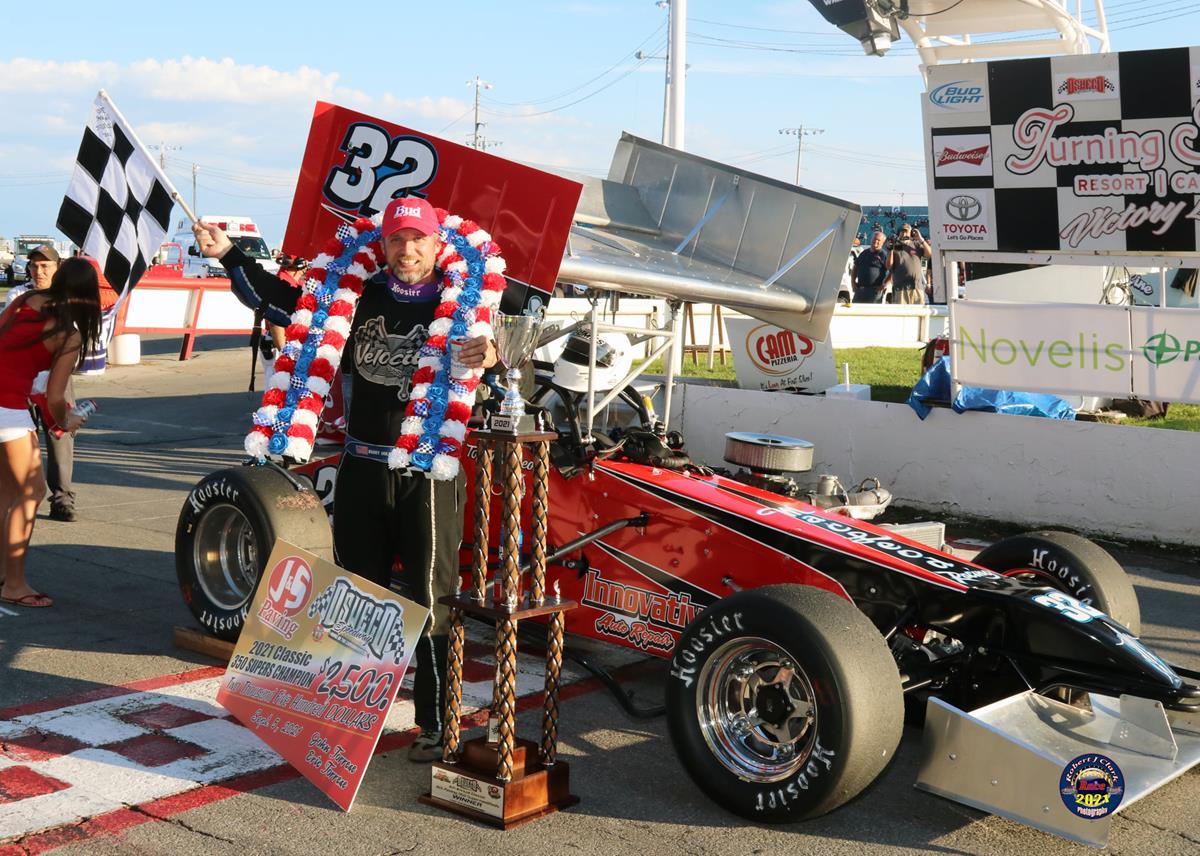 OSWEGO, NY (September 7, 2021) - Early last week, Lockport, NY’s Bobby Holmes had never sat in a Supermodified. By Sunday afternoon, he was a 350 Supermodified Classic Champion at the Oswego Speedway.

Holmes was tabbed as the driver of the MacLeod Racing No. 32 when usual pilot Tom MacLeod was unable to make it to the Classic due to family commitments.

From the pole position, the Modified and TQ Midget standout was able to walk away from the field, and after losing the lead from Tyler Thompson, took the point back on a restart, cruising from there to the $2,500 payday.

The 4th annual, 40-lap Classic was unfortunately marred by a number of caution flags.

By virtue of the time trial inversion, ninth and tenth fast timers Holmes and New Englander Mike Keddy started on the front row.

Right away, the yellow came out when James Capps III and Vern LaFave got tangled together coming to the green.

After jumping out in front on the initial start, Holmes was again able to shoot into the lead on the second attempt, which again resulted in a yellow flag for James Witkum, who was into the inside hub rail off turn 2.

Track champion Mike Bruce received damage in the midst of this incident and had to pit for a new nose wing.

Finally, the third time was the charm as Holmes took over the early lead at the drop of the green with Keddy falling in line for second.

The third yellow came out on lap 4 when Jim Storace slowed his No. 57 down the front stretch.

On the restart, Storace got squirrely going into turn 1, bringing out a fourth caution flag.

The fifth double-file race to the first corner was again won by Holmes, who continued to pull away from the field in early stages.

By lap 5, though, Holmes was put on notice as Thompson got underneath the Keddy No. 79 for second.

While working on Locke for fifth, Dalton Doyle spun his No. 08 into the turn 3 foam, collecting Barry Kingsley in the incident.

Both cars received only minor damage and were able to tag the tail.

Spring Classic Champion Jeffrey Battle also wound up with front-end damage in this incident, forcing the No. 14 to go to the pits and fall in at the back of the field.

For the sixth time, Holmes jumped out in front on the start, this time over Thompson.

With 10 complete, 15-year-old Locke was on the move, first going by Cliff for fourth and then Keddy for third and began to move in on the Thompson No. 98T.

On lap 12, New Englander Capps found himself into the outside turn 4 wall for a second time, and on this occasion, the No. 64 would have to go off on the hook, however he would later be able to re-join the field.

After a lengthy delay for re-fueling under a red flag, Holmes was not able to fend off Thompson this time, and the former International Classic Champion took the race lead on lap 12.

Also on the move on this restart was Thompson’s eighth starting teammate Brian Sobus, who found his way into fifth with 15 laps complete.

Thompson began to open up a big lead as the race approached the halfway mark, but a yellow flag for debris strung the field back together for yet another restart.

Holmes made a valiant effort to stick with Thompson on this restart, but was unable to do so.

Almost immediately, the caution lights were illuminated again and Capps wished he had stayed in the pits as he tangled with Kingsley down the front stretch, effectively ending both of their days.

This incident gave Holmes the opportunity he needed, however, and on the ninth restart of the race, was able to pin Thompson low to take the lead back again.

Holmes lead at the halfway mark with Thompson second, eleventh starting Eddie Witkum Jr. on the charge stealing the third position from Keddy, Keddy now fourth, and Locke fifth, with Sobus falling back to sixth.

With 19 laps to go, eighth running Bobby Timmons III lost the handle on the No. 13, and collected Bruce, Vern LaFave, and Kyle Perry, all of who made very heavy contact with Timmons car and the outside foam.

This resulted in another red flag and lengthy cleanup.

On the restart, Holmes this time was again able to keep Thompson at bay, with Witkum holding onto third, Keddy fourth, and Locke fifth.

With 15 laps to go, Locke was able to take advantage of Keddy getting a bit out of shape to seal the fourth spot.

On lap 27, ninth and tenth running Netishen and Ben Tinker came together, with Tinker going backwards into the turn three foam, ending the day for the No. 19.

On the restart, an immediate debris caution was thrown, meaning Holmes would have to do it again and see if he could hold off Thompson.

On both restarts, Holmes was able to hold Thompson off and pull away, leaving Thompson to fend off the challenges of Witkum, Locke, and Keddy.

Finally, with 12 to go, Sobus was able to sneak under Keddy for fifth, stealing a spot in the top five.

As the laps wound down, Holmes was long gone and the battle turned out to be for second through fifth between Thompson, Witkum, and Locke.

Thompson had held off the challenges of Witkum for 7 laps before a mechanical failure dropped the Top Quality Motorsports car out of second place and into the pits with six to go.

This moved Witkum to second, Locke third, Sobus fourth, and Battle found himself all the way back up in fifth.

By now, more than a half straight away lead separated Holmes and the field, with the first-timer able to way away from the field and to the win seemingly with ease.