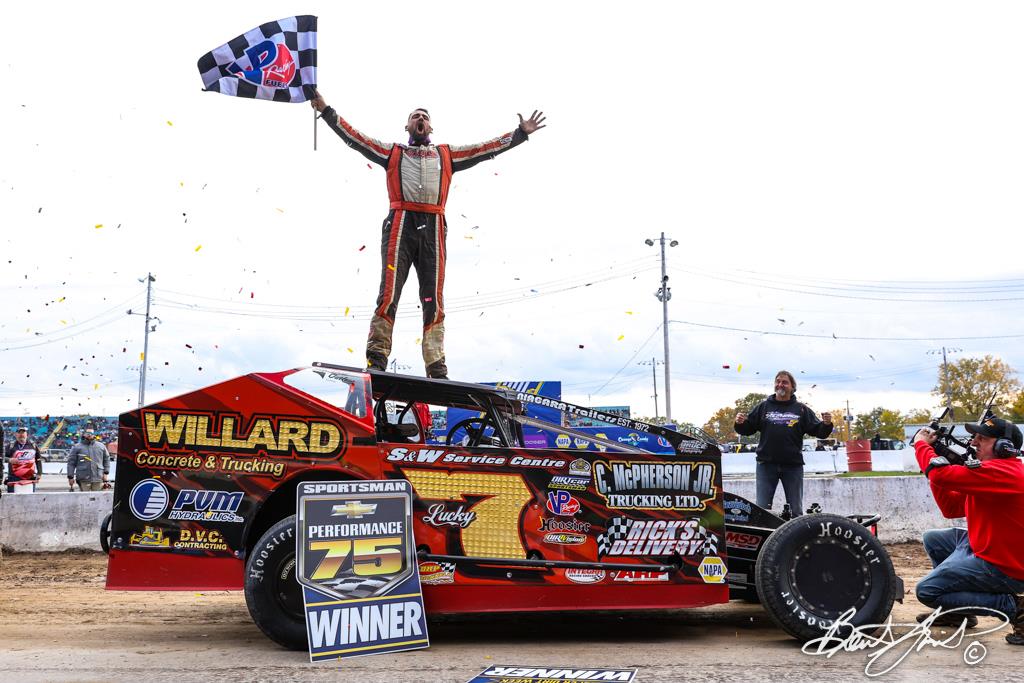 OSWEGO, NY (October 9, 2022) - He’s been the most dominant DIRTcar Sportsman Modified driver in the nation this year, and now, Cody McPherson has the most coveted trophy to prove it.

In one of the most impressive displays put on at Oswego Speedway in recent editions of NAPA Auto Parts Super DIRT Week, McPherson showed the same prowess he’s shown all season long in DIRTcar-sanctioned action, leading all 75 laps around the 5/8-mile oval to collect the $4,000 grand prize and his first career Super DIRT Week title.

“This one’s been on the bucket list since I was a little kid going to the [Syracuse] Mile,” McPherson, of St. Catharines, ON, said. “Watching everyone race, and hearing about all the stories of Super DIRT Week and the legacy. This is the 50th one, so I feel like this one will be talked about a little bit more.”

The win tops-off a record season for the 30-year-old Canadian. With 16 total DIRTcar Feature wins (most of any driver), the Hoosier Racing Tire Weekly Racing Series championship, and now a 19-point lead in the Sportsman Series Fall Championship, this level of domination has not been seen in the division since the likes of Rocky Warner, Dave Marcuccilli and Brad Rouse ruled the ranks.

McPherson made it a goal to win the Hoosier Weekly title this year, racing as much as possible around home and in the States at some of his favorite venues. Now with the Super DIRT Week title in-hand, he reflected on the work it took to get to this point.

“It was a grind; it was always just me and [crew member] Rick,” McPherson said. “Just the two of us going to all these shows. Luckily, my dad was able to come here this weekend and help out. But for the most part, it’s me and Rick in the shop, me and Rick at the racetrack, it’s me and Rick going five-and-a-half hours down the road to Albany-Saratoga, three-and-a-half to Fulton and back… it’s a grind.”

Though the box score will show he led all 75, McPherson had anything but an easy time out front.

He won the mad dash into Turn 1 at the drop of the green, putting fellow heavy-hitters Matt Janczuk and Chris Mackey behind him for the first 30 laps. Behind them, a hard-charging Zach Sobotka was making a break for the head of the field – reminiscent of his run from 19th in last year’s event.

Sobotka, the defending Chevy Performance 75 winner from Parish, NY, was putting his knowledge of Oswego to work, making his way through the top-10 and up to fourth by Lap 35. After a quick caution, Sobotka took advantage of a mistake by Matt Janczuk on the restart to move to third and could see the leaders within his reach.

When Janczuk nearly spun on the restart, Chad Edwards followed Sobotka through the open door into Turn 1 to take fourth. The very next lap, the two caught and passed Chris Mackey the same way to advance to second and third – continuing a drastic swing in momentum for Edwards, who was going backwards in the early stages.

“We kinda sank back to seventh or eighth there early in the race, and came back up through,” Edwards said. “Every caution, it seemed like we’d get one car on the restart.”

After a few late-race cautions, the top-five continued to chase each other into the closing stages. With eight-to-go and just under a second lead, McPherson reached lapped traffic with Sobotka right on his tail. He moved swiftly past the first two cars and appeared to be in the clear for the final laps, until the yellow was displayed once again with three laps left on the board.

Restart time. Single-file, last year’s winner right on his bumper, and a big check on the line. With the pressure on, McPherson kept a cool head.

“With the yellow at three-to-go, I wasn’t too worried,” McPherson said. “I knew Sobotka would be right there; he’s such a good runner, just like Janczuk was there the whole time.

“I just knew to calm myself down, hit my marks and if it was meant to be, it was gonna be, and if not, it wasn’t.”

McPherson stomped the throttle in Turn 4. Sobotka looked to his inside down the frontstretch and nearly found some space but was met with a left-rear fender as McPherson closed the door on him.

Sobotka (38) looking for a way around McPherson (7) (Michael Fry Photo)
“I tried to make a hole where there wasn’t,” Sobotka said. “I really expected Cody to slide-up a bit, and he came down to the bottom.

“I tried to put my nose in there, and Cody was there, and I just hit him with the right-front. It kicked the car back around, and that’s when Chad [Edwards] was able to get under me.”

Edwards took advantage of the situation, peeking underneath Sobotka before they reached Turn 1. He made the pass at the exit of Turn 2 and made a beeline for McPherson, but time was nearly out. McPherson led the field back around to the checkers to seal the win.

“Definitely not easy,” McPherson said. “I was confident, no doubt. I knew we had a good car, but I also knew there was a lot of other good cars here too – a lot of talent. I just knew I had to hit my marks and do 75 perfect laps.”