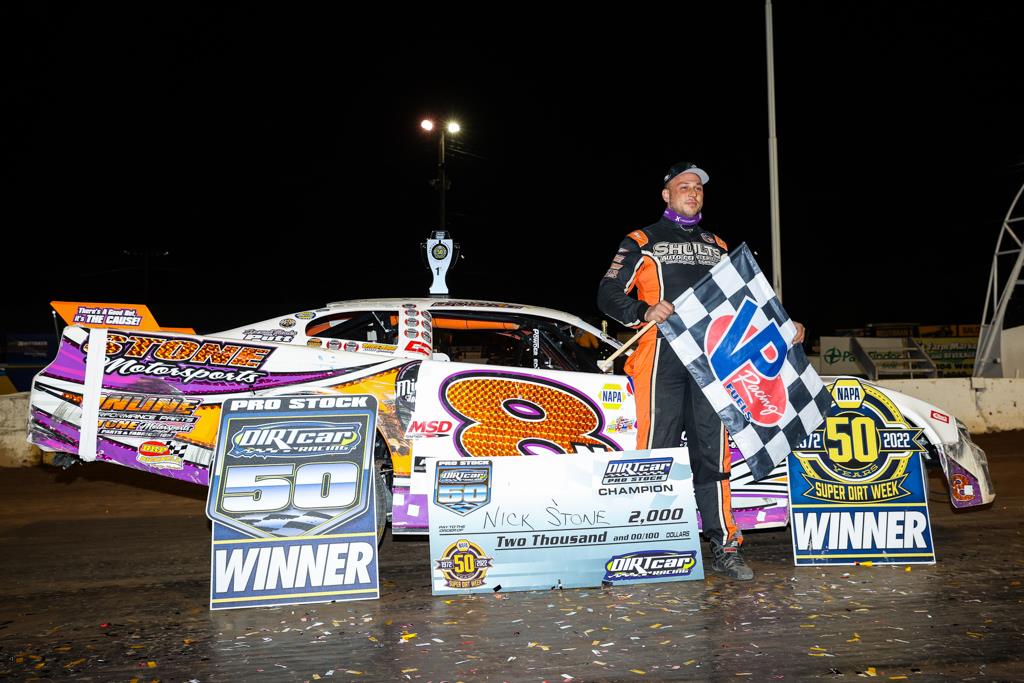 However, while the statistics show “The Manimal” led 39 laps, his win was anything but easy.

Behind them, Stone started to rise from his fourth starting position. It took him eight laps to power past Duell for second and set his sights on Dumblewski.

He quickly closed on the Amsterdam, NY driver, but Dumblewski took the outside lane away, successfully blocking his attempt to take the lead in Turn 2. Stone immediately switched lanes down the backstretch and used momentum off Turn 2 to inch ahead of the #7D in Turn 4 to take the lead on Lap 13.

It was a lead he wouldn’t relinquish, despite a final challenge in the race’s closing stages—three attempts at a green-white-checkered finish.

The Pro Stock veteran kept his competitors at bay on all three, holding on to score his first win at Oswego Speedway.

“All I can say is finally,” Stone said. “We’ve been trying since back in Syracuse, and I’ve been trying here ever since it’s been here. And we finally did it.”

“I just wanted to get those good starts and stay to the bottom, and I figured I’d be alright if I just keep them on my tail.”

Despite grabbing the lead early in the Feature, he struggled initially. It wasn’t until he passed Duell on the bottom that he realized it was the place to be.

“At the beginning of the race, I was trying anything,” Stone said. “I kind of shot it in up there. I didn’t want to be up there. There was no traction. I just got a heck of a run off the corner, and it worked out.

“Getting out there early was the way to go.”

Dumblewski held on for second—his third runner-up finish in the DIRTcar Pro Stock 50. The Amsterdam, NY, driver said his car was better on longer runs.

“The restarts were definitely tough,” Dumblewski said. “Once I got rolling, I was real good. The longer runs were where I felt like I was much better.

“I think it’s the third time we’ve finished second here, so a win would’ve been nice, but it’s a very good weekend for us.”

He said he knew he faced an uphill climb from the beginning.

“We started a bit farther back than these guys, so we had a lot of really good cars to pass,” Stefanski said. “I kind of got shuffled back at the beginning, and I figured if we bided our time, then we could get back to the front.”

“It’s so great because it was my dream to [win a title] on dirt,” Richard said. “We started in April, and day by day, we were supposed to [only battle for a track championship], and we win everywhere we go.

“It’s so great to get [the championship] because it was one of my dreams.”

UP NEXT: The DIRTcar Pro Stocks head to The DIRT Track at Charlotte for the World Short Track Championships Oct. 27-29.