Please visit SuperDIRTWeek.com for up to date event information, schedules, and results. 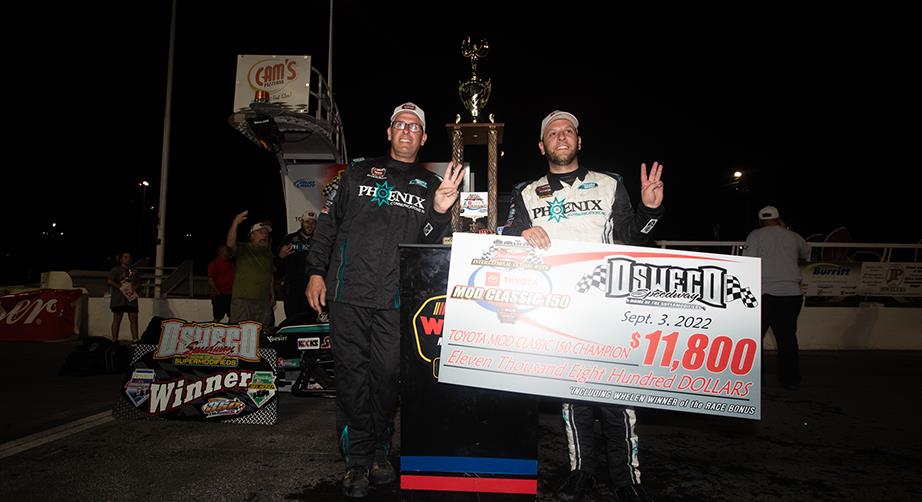 Bonsignore Holds On For Third NASCAR Modified Tour Win Of ’22

OSWEGO, NY (September 4, 2022) – In what has been an inconsistent season by Justin Bonsignore’s standards, Saturday’s Toyota – Bud Mod Classic 150 at Oswego Speedway was more feast than famine for the three-time NASCAR Whelen Modified Tour champion.

A decision to stay out during a late caution when leader Doug Coby pitted promoted Bonsignore to the front of the field, where he had to fend off challenges on old tires from his cousin Kyle Bonsignore, Craig Lutz, and Chuck Hossfeld to bring home his third victory on the 2022 season.

Knowing that Coby had one of the fastest cars, Bonsignore wanted to do something different that would give him an opportunity for the win, but admitted it was stressful fending off Hossefeld and the field during the closing laps.

“I don’t know if Doug just got tired of winning,” Bonsignore said. “I faked like I was coming to pit road and it was a gift getting the lead. Chucky was really good there at the end. He was actually going to spot for me tonight, but he ended up racing.

“We’ve kind of been like a bunch of brothers that have been giving each other a lot of crap lately, so this is good medicine to solve that I think.”

Although he is now tied with Coby in the win column this year, early misfortune has prevented Bonsignore from taking full control of the NASCAR Whelen Modified Tour standings.

Bonsignore’s win at Richmond Raceway was sandwiched between two finishes outside the Top 20 at New Smyrna Speedway and Riverhead Raceway. Ever since the latter race, Bonsignore has only finished outside the Top 10 once.

Even though he got the benefit of clean air at the end, Bonsignore never thought his second career victory at Oswego was a secure one, especially with Hossfeld carving his way through the field to make a late charge.

The Toyota – Bud Mod Classic 150 was only Hossfeld’s second NASCAR Whelen Modified Tour start of 2022, but he made it a memorable one by getting to Bonsignore’s back bumper and using every part of the track in an attempt to pass him before settling for second.

A win for Hossfeld on Saturday would have been his first in the NASCAR Whelen Modified Tour since 2008. Despite coming up one spot short, Hossfeld commended everyone involved with Joe Bertuccio Sr.’s operation for giving him such a great car.

“We had some time off, which is hard on a driver,” Hossfeld said. “Our car owner Joe [Bertuccio Sr.] didn’t even come [on Saturday]. He goes to a wedding and tells us to have fun, but what a great team. I’m proud of everyone involved.”

Hossfeld has split the No. 2 Gershow Recycling Modified with Bertuccio’s son, J.R., in five races this year. Prior to Saturday’s race at Oswego, Hossfeld gave the car its best run of the year at Richmond, where he finished third behind Bonsignore and Tommy Catalano.

With another strong performance under his belt, Hossfeld believes he is getting closer to breaking a 14-year winless drought driving for Bertuccio, who he plans to celebrate with once he returns to the shop.

“I’m going to give [Bertuccio] a hug,” Hossfeld said. “He’s not the hugging type too, but he’ll be proud. He should be proud of all the people that work so hard.”

Bonsignore was thankful that Hossfeld raced him cleanly coming to the checkered flag, but also expressed relief to finally be back in Victory Lane after being hindered by numerous issues in his quest to claim a third consecutive NASCAR Whelen Modified Tour title.

Although Bonsignore still has some ground to make up against Ron Silk and Jon McKennedy, he remains optimistic about his chances to overtake both of them during the final weeks of the regular season as long as he and his team find the consistency they’ve been looking for.

“We’ve been struggling,” Bonsignore said. “We hold ourselves to a high standard and it’s been an up-and-down summer. A few issues in the summer put us behind and we haven’t had the speed or consistency week in and week out. We got it good tonight. We’re not out of the points yet either, so we’ll move on to Riverhead and see what happens.”

The third trip to Riverhead for the NASCAR Whelen Modified Tour this year on September 17 for the Eddie Partridge 256 presents an ideal opportunity for Bonsignore to erase more of his points deficit, as he has won there eight times during his career.

A replay of the Toyota – Bud Mod Classic 150 can be seen on USA Network on Sunday, Sept. 11 at noon.

The NASCAR Whelen Modified Tour gets a couple of weeks off before their next race at Riverhead Raceway on September 17.