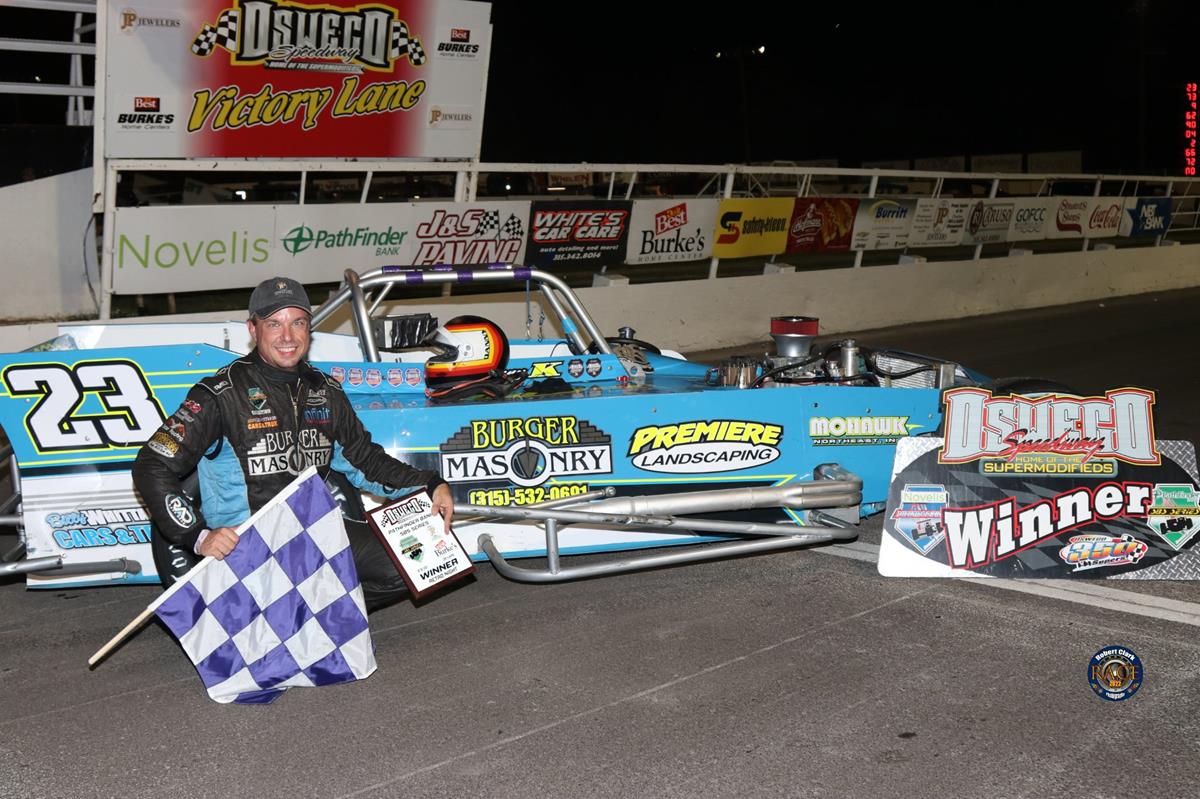 OSWEGO, NY (August 6, 2022) - Driving the Flack Racing No. 23, defending Speedway champion Dan Kapuscinski started in the twelve spot and needed only a mere five laps to take over the race lead and cruise to a comfortable victory for the sixth time of the 2022 season on Burke’s Do It Best Home Centers and JP Jewelers Retro Night at Oswego Speedway this past Saturday.

Kapuscinski has put together a dream season, winning the Tony White Memorial on May 28, going back to back in the June 4 30-lapper, making it three in a row in the first June 18 Twin 20 before a second to Tim Proud in the second twin, won two of three in July first with the July 2nd Grand Prix and once again in the July 16 Summer Championship before settling for runner-up to Mike Bond in the Mr. Pathfinder Bank SBS event on July 23.

With a dominant return to victory lane to kickstart the month of August, Danny K has now made it six of eight this season, tallying ten feature wins in the past two years alone, and ensuring that all he will need to do to clinch his second straight title is simply show up to the Speedway next weekend.

“This is in memory of Joey Witkum,” said Kapuscinski. “Joey was an awesome guy. He gave me my first chance to drive a Supermodified many years ago when I didn’t really deserve a chance, but I’m thinking of the entire Witkum family. I really have to thank Mike Bond and Chip Wood for working on this car today. Actually under caution it kept shutting off, and we were lucky it would go under green, but had to keep re-firing it under yellow. Thanks to Mikey, Steve, and all the sponsors. I just have to thank all of these guys so much for such an incredible season.”

Settling for his seventh podium and third runner-up finish of the season was 2021 Rookie of the Year recipient Noah Ratcliff, who started in eighth, and after being passed by Kapuscinski early on, would continue to follow the No. 23 car up through the field. The 17 year old has again put together an eye opening campaign, putting the family owned No. 73 on the podium in all but one event. Now with a total of four career second place finishes, the young talent continues to knock on the door for career win number one.

“I kind of knew it was going to be a mid-race car coming into
the feature,” commented Ratcliff. “We will keep working on getting it better over the next couple weeks and try to go for one more spot. I feel like we have a pretty good shot. The car has been consistent all year long and we’re just trying to figure out what we can do to beat that 23.”

Completing the podium was polesitter Griffin Miller, who had been bitten by a tough string of bad luck throughout the month of July, but recovered nicely to hang up at the front and begin the final stretch of the season with a solid podium finish for the Lucky Motorsports No. 9 team.

“We came out tonight just looking to finish a race,” stated Miller. “We have had a really bad year. Just threw some old tires on and tried to get a good run. I ended up starting on the pole and the car was getting wicked loose throughout the feature, but I’m just happy to be back up here again. It's pretty nice to finish a race. I have to thank John (Altman) especially. He puts his heart and soul into this car every week especially when things go wrong, my Grandfather, Rita, my Dad, Steven, and everybody that helps out.”

The 30-lap feature was marred by only a handful of caution flags, with notable incidents involving Tony Pisa, a first-time heat race winner earlier in the evening. While battling hard for third on lap 3, Kapuscinski and Pisa brushed wheels exiting turn four, with Pisa ending up in the outside steel.

Filling in behind the wheel of the re-numbered Robbie Wirth Racing backup No. 77, Cameron Rowe also saw a top five run go sour after contact from Tony DeStevens, ended a fine run for both drivers with seven laps to go.

When the checkered flag flew, rookie points leader Darren Shuman was strong for the third top five of his debut season, holding off a hard charging Greg O’Connor, who recovered from an earlier spin to drive all the way back up to fifth.

The Pathfinder Bank SBS will receive the week off next Saturday, August 13, for the third and final Oswego Winged Super Challenge of 2022. J&S Paving 350 Supers will serve as co-headliners for the winged spectacular with all three divisions returning for Championship Night on August 20.