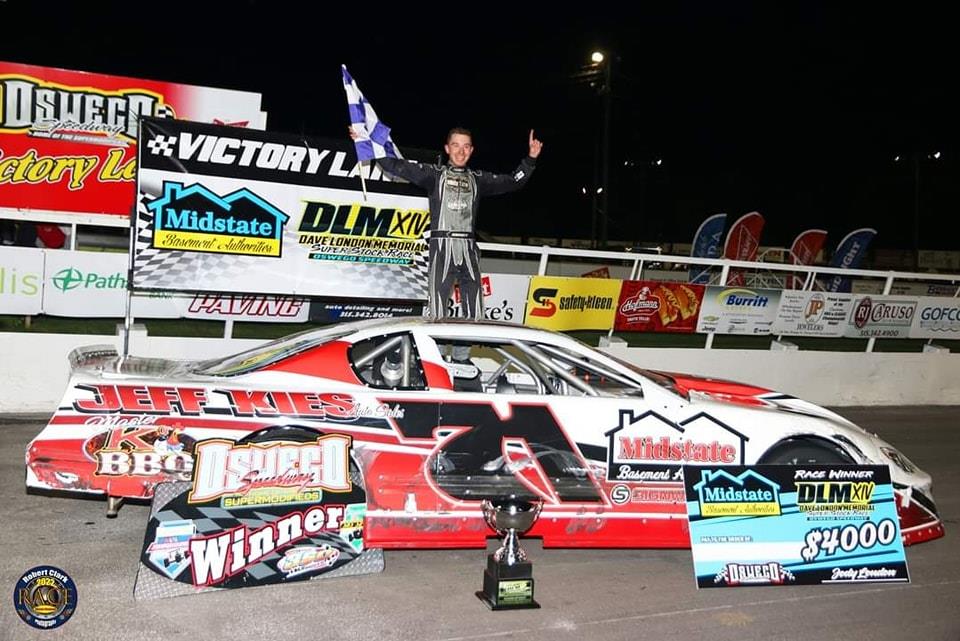 OSWEGO, NY (September 19, 2022) - Garrett Zacharias from Candor, NY picked up the win in the Dave London Memorial XIV at Oswego Speedway on Friday night of Classic Weekend. After starting 13th on the grid, Zacharias worked his way through the field and once he took the lead, he pulled away to score the win. Effort, PA’s Dan Cascioli brought the brooms out as he swept the weekend for the Rusty Diamond Cores LLC New York State Compact Championship with wins Friday and Saturday.

Brandon Oltra and Seth Zacharias would lead the 30-car field to the green flag, with Zacharias leading the opening circuit, with Chris Riendeau taking over second place. Riendeau would take the lead away from Zacharias on lap four. Lee Sharpsteen spun in turn two to bring out the race’s first caution with four laps complete. On the restart, Riendeau would continue to show the way over Zacharias, with TJ Cochrane in third place, and pressuring Zacharias for second place. The caution flag would come back out as Eric Brown made hard contact with the inside boiler plate wall. Following the lap six caution,
Riendeau continued to show the way. Jake Christman would work his way into third place, after passing Cochrane on lap seven. Terry Cheetham spun in turn one, and Tim Faro made hard contact to bring the yellow flags back out.

Christman’s strong run would come to an end on lap 26 as he slowed on the top side of turn number four. Evan Rygielski would take the lead away from Riendeau, with Cochrane and Garrett Zacharias racing in the top four. Garrett Zacharias would go three-wide with Riendeau and Cochrane for second place, but Cochrane would be able to take over second place. Garrett’s run to the front would continue as he would take over second place on lap 29. Zacharias would catch the leader Rygielski. The two young-guns would battle for the lead, with Zacharias taking the lead with 15-laps remaining. Zacharias would go on to score the win, his third win at Oswego in 2022. “Drawing 13th was the worst I’ve drawn and didn’t know if I had a shot but was able to bid my time and work through the field,” Zacharias said in victory lane. “I cannot believe I went three for three at Oswego, absolutely unbelievable.”

Effort, PA’s Dan Cascioli started on the pole on night one for the Rusty Diamond Cores LLC New York State Compact Championship and quickly pulled away from the balance of the field. The field would go three and four wide throughout the event, as the Compact cars raced on the wide Oswego surface. Dave Millbrand would take over second place early on, with CJ Lavair racing in third place. After a lap five caution for debris, Cascioli would once again start to pull away from the field, with Millbrand racing in second place. After starting 15th on the grid, Joey Pettinelli would work his way into the top five. A late-race restart would bunch the field up, and Cascioli would take off in the lead and would go on to score the win. “That was an awesome race and I absolutely love this track,” Cascioli said in victory lane.

Saturday of Classic Weekend saw the Super Stocks back in action for the Black 16, a 16-lap event in honor and memory of Terry Cochrane, and it was Walnutport, PA driver Jake Christman picking up the win. Christman would score his first Oswego checkered flag over Seth Zacharias, Zach Willis, Nick Robinson, and Evan Rygielski.