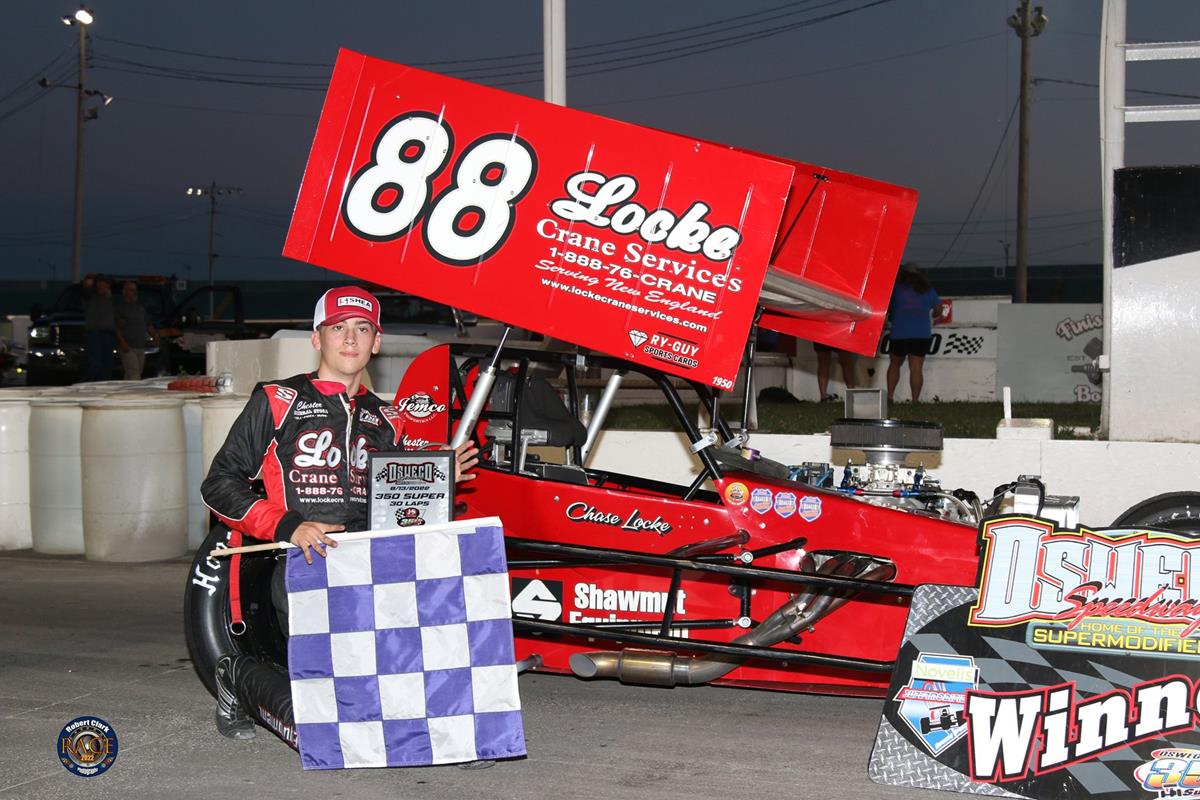 Locke Passes LaFave Late to Win Fourth of the Season

OSWEGO, NY (August 15, 2022) - Make it four. 16 year-old Chase Locke started in the eleven spot in last Saturday’s 30-lap J&S Paving 350 Super main and put together another masterful performance, driving from the back of the pack to his fourth win of the season with the Locke Crane Services No. 88.

As he has done all year long, Locke again drove like a seasoned veteran, but this time victory did not come quite as comfortably, as Chase had to get by a host of talent enroute to the front including championship rival Brian Sobus, who he has now opened a 46 point advantage over going into Championship Night this Saturday, August 20.

Veteran driver Vern LaFave settled for second. LaFave has had a season he would rather forget, at least until last weekend, when the driver of the No. 97 led the first 25-laps from his pole starting spot before giving way to Locke, who made a low side bid for the lead with five laps to go. It was Vern’s best finish of the season.

“It's been a terrible year. We have struggled horribly,” LaFave mentioned.” Everything we've changed wasn't working, but we have worked really hard the last few weeks to make some big changes and it helps to start up front, but we must have changed it for the good. I'm 63 years old and couldn't beat a 16 year old tonight."

Completing the podium was Supermodified veteran, Jason Spaulding. Spaulding started on the outside pole and ran in second behind LaFave for two thirds of the way in before Locke was able to crack the top five, and eventually picked off the No. 23 on the high side. Jason, who is filling in for daughter Kali for the remainder of the season, was able to hold onto the third spot convincingly for his first podium of the year.

“"It was great running up front tonight. We came to Fast Friday yesterday because my crew talked me into it. I didn't plan on it, but we made some crazy changes and apparently it all worked,” Spaulding stated. “I need to thank my whole crew - my wife, Tanner, Brian, Mike, Colleen, Noah, Nate, my parents and the sponsors - Aqua Spa, LeRoi Fine Jewelry, Jake's Automotive, Tricky Dick's Roadside Grill, Great Lakes Seal Coat, Oswego Falls Cornhall, Fast Eddie's Towing & Recovery, Corr/Pak Merchandising, the Virgo Brothers, Shepard Enterprises Trucking, and Sean Magari Enterprises."

Rookie Josh Sokoloc was knocking on the door for another podium finish in the closing laps, but wound up finishing in fourth while Kerry Perry completed the top five.

Sobus, who sustained wing damage earlier in the event, would have to settle for a sixth place finish followed by Dave Cliff, Dalton Doyle, first-timer Matt Caprara, and Nick Barzee completed the top ten.

Locke will look to clinch his first track title on LaGraf’s Pub Autograph and Fireworks Night this Saturday, August 20, and become by far the youngest track champion in Oswego Speedway’s 71 year history.