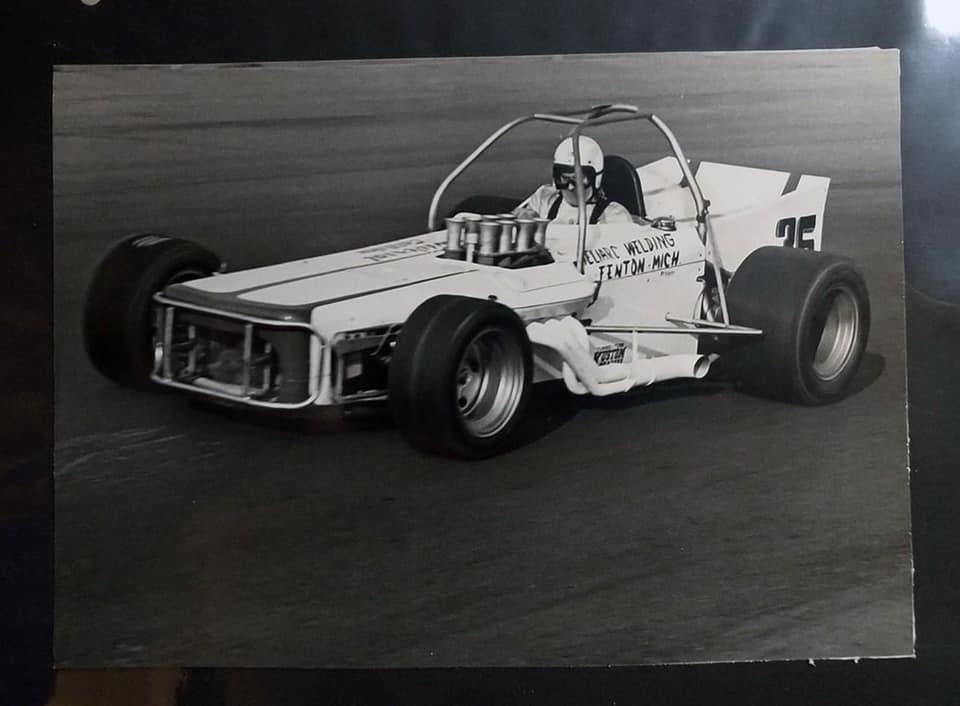 Thank you to Fred Otterbein, for emailing us this beautiful piece on former Speedway racer Eldon Schrader, who passed away this past Saturday, June 11, 2022. Track management sends our heartfelt condolences to the Schrader Family.

It was during the final days of the Grand Rapids Speedrome (1964 – the middle of 1966) that some of us first met Eldon Schrader. The supermodifieds, which Eldon was racing, would pit on the old quarter-mile track. He raced for Phil Spooner out of Battle Creek and he became special to us because he was so outgoing and approachable. Supermodified drivers were busy and didn’t always have much interest in talking to boys who really wanted to feel like men. Eldon helped us realize that experience, even though we hadn’t met formally. We became fans of his instantly.

Eldon began his racing career in the early fifties at southern Michigan racetracks like: Prairie River and Mottville. Later he would race at South Bend, Kalamazoo, Berlin, and Oswego New York, the crown jewel of supermodified racing.
Eldon raced from the early fifties until the early eighties.

A couple of years ago, it came to my attention that Eldon had not made the final cut in votes to be inducted into the Michigan Motor Sports Hall of Fame (MMSHF). This I felt was unfortunate because Eldon had equal if not better credentials than many of the supermodified drivers who had already been inducted!

I contacted a friend of mine, John Boy Hotchkiss who is a past accomplished sprint car driver (#75) and also the Vice – President of the MMSHF. John said sure, I could help Eldon’s cause during the induction process for the following year. And, Eldon’s daughter, Lorrie Mangum, welcomed my help.
I worked on Eldon’s stats from the 1968 season at Berlin Raceway in which Eldon had great success driving the Kalamazoo based, Lester Biard # 2, and also of the stats from Oswego Speedway where Eldon did very well at. I needed to have my information ready for daughter Lorrie by February 2020. It would take several months for the MMSHF to sort through all of the nominations and then narrow it down to just a few new inductees.

Eldon has been married for 65 years; both of his wives have passed due to illness. He’s been a great family man to his blood and adopted children. He told me, “… he loves them all just like they were all his biological children.”

One year, Eldon received “Sportsman of the Year” from Oswego Speedway!
And, one of the most legendary supermodified drivers in the country, especially in New York, was old Nolan Swift aka, “Swifty.” Almost as legendary as Swifty was his car owner and crew chief, Billy Taylor from Syracuse, New York. When Billy Taylor was in the Michigan area, he would make a point to scoot over to Sturgis, Michigan to see his old friend, Eldon Schrader. Those are examples of how Eldon’s competitors loved and respected him.

Preparing for the 1971 - 200 lap Oswego Classic of September 1971, car owners Ernie and Bob June, who had been voted “Car Owners of the Year” by Oswego Speedway, hand-picked Eldon to run the Classic for them. Out of the 59 cars attempting to qualify for the 40 starting positions, not only did Eldon qualified for the 71 Classic, but he nearly won the thing finishing 4th!

Months of vote counting had passed since February and It was the first Monday of August 2020 and the phone rang at my house at 9pm. It was John Boy. Quickly John said, “well, Eldon made it into the MMSHF! What great news. Even greater, and certainly humbling for me, John said that he and MMSHF President Dave DeHem thought that I should be the one to let Eldon know that he made. I was so honored by Dave and John’s jester to let me be the one to let my old racing hero know that he was in the MMSHF!

The annual MMSHF banquet in 2021 would, because of covid, include both the 2020 and 2021 inductees. Lori, Eldon’s daughter, who did so much to work towards her father’s induction, invited me to attend the banquet with them.

When I arrived, and since Eldon was now 90, Lorrie thought that someone should help her dad with his acceptance speech. They asked me to do it!

I had not prepared for this assignment and I was a little nervous about accepting. Lori simply turned over to me and said, “… it’s in the Lord’s hands, you’ll do fine.” Well, that was cool with me and I was much more relaxed after that. It all seemed to go fine.

One of the last things I mentioned in my part of Eldon’s acceptance speech, was what a great gentleman, family man and person he was, notwithstanding his superb racing accomplishments!

And, I said that he was a tremendous ambassador for motor sports.
Motorsports, and the world in general, needs more people like Eldon Schrader!

Early on Saturday morning, June 11, 2022, one of the greatest supermodified drivers and human beings ever to live passed away peacefully at home with his daughter Lorrie by his side.

I’m sure there are many others who will remember Eldon as the years pass along.
God bless Eldon and his family and friends.