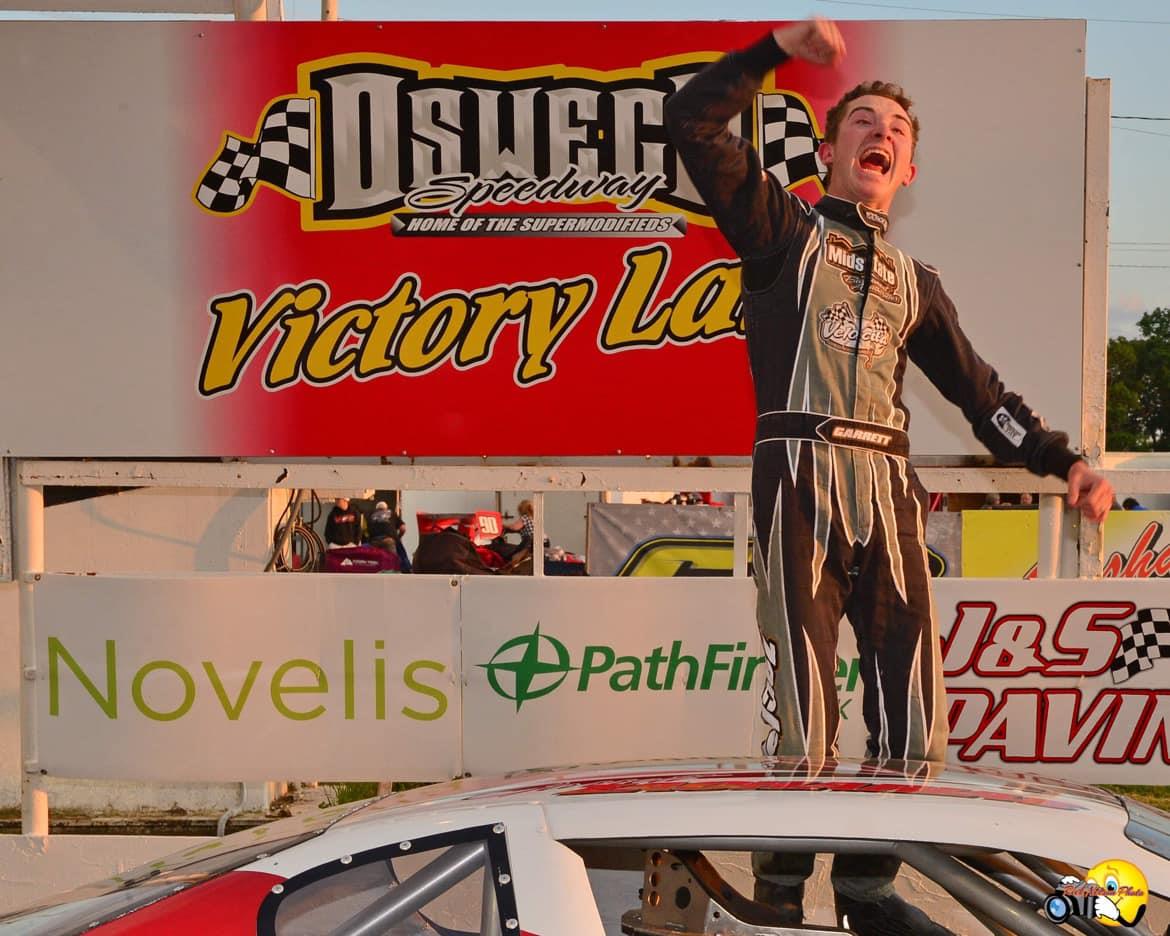 OSWEGO, NY (June 12, 2022) - The New York Super Stocks returned to Oswego speedway for their second event of the season. The teams look forward to these events to tune their rides up for the Dave London Memorial XIV slated for September 2. The teams were treated to a short rain delay during practice but the rains held off for the remainder of the evening allowing for an action packed 35 laps through the field.

The night started with three qualifying events being picked up the “Bad Banana” number 5 of Jacob Gustafson, the 36 of flying Brian Hallett, and the reigning series champion the 71 of Garrett Zacharias. The 13H machine piloted by Brandon Oltra led the first two laps of the first qualifier but had to go pit side with brake issues. The 09 machine piloted by Josh Hunter couldn’t make the qualifying due to carburetor issues relinquishing him to starting at the tail of the field for the feature.

The fans were treated to a “three wide salute” for the wave lap by the sharp looking cars. On the initial start Zacharias, who’s girlfriend drew the pole for him, immediately jumped out front only to have the caution come out for contact in turn 1/2 between the second and third place starter of Lee Sharpsteen and Bobby Newman. The field would quickly reset as the 77 and 8 fell to the rear for contact. Zacharias would quickly jump out front of the new second place car, 36 of flying Brian. The second caution would fly on lap 7 when “bad Brad Haynes” would have a right rear tire go down causing contact with the turn 4 outside wall. The cars would make use of the “short track” to allow clean up crews the space and time needed to extract the 13x from the outside wall.

The racing would resume seeing Zacharias jump out front with Hallett, last weeks winner 48X of Christman, 17Z of Seth Zacharias and the bad banana of Gustafson falling in line for the top 5 positions. The field would duke it out seeing the 09 of Hunter and 13H of Oltra who both started at the rear of the field making strong gains toward the front. A single car spin of the 77 driven by Newman at lap 21 would tighten the field back up for what would be the run to the checkers. The strong 71 of Zacharias would once again dominate the restart showing the way to the checkered flag. Top three finishers would get opportunity in victory lane to thank their sponsors for the 2022 season.

The hard charger award presented by Big Time Service was awarded to the 09 of Josh Hunter again this week with a gain of 10 positions in the 35 lap event.

The series would like to thank Oswego Speedway staff and crew, Big Time Service for the hard charger sponsorship, GTR Promotions , the fans for their support and last but certainly not least for the drivers and their dedication in these unprecedented times of high fuel costs.