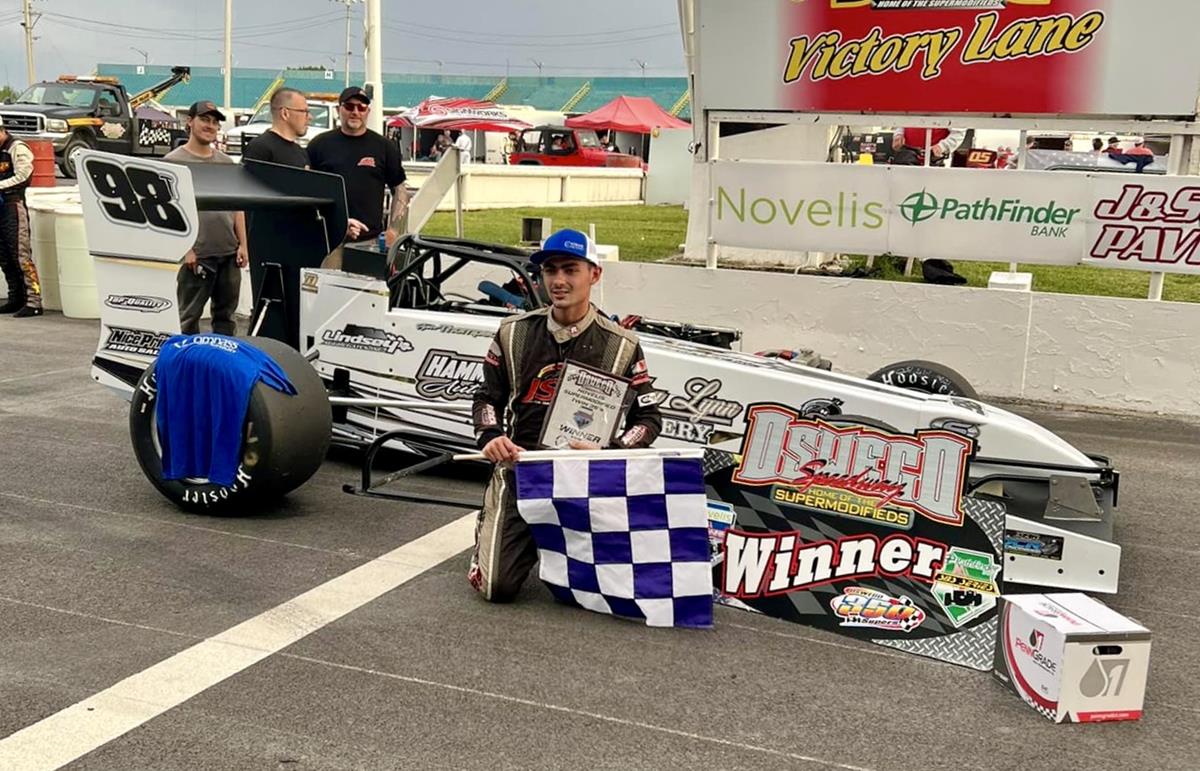 OSWEGO, NY (June 11, 2022) - Tyler Thompson and Dave Danzer earned the fourth and twelfth Oswego Supermodified feature wins of their careers, respectively, as the Oswego, NY drivers were victorious on Compass Credit Union Twin 35 night at the Steel Palace this past weekend.

Thompson started on the pole for the first 35-lap dash and pulled away from outside polesitter Joe Gosek and third starting Jeff Abold to cruise to a comfortable victory in the Jason Simmons Racing No. 98T.

“I had a rocketship tonight,” Thompson said. “ I have to thank my Dad for letting me drive this car and the guys for all the hard work they put in for me, as well as my Mom, my girlfriend, and all of the amazing sponsors on my car.”

Gosek finished in second, notching the first podium of his 2022 season, with Abold recovering from motor problems on Opening Night to finish a fine third.

The second 35-lapper saw the top six inverted with Thompson starting in twelfth, Gosek in eleventh, and so on, with positions seven through twelve re-drawing for starting spots one through six.

Patrick led the field to green from inside of the front row, but it was Opening Night winner Brandon Bellinger who got the jump from the outside lane to take the race lead.

The start was marred by two incidents, first involving Gosek, LeVea Jr, and LaTulip in turn three, as these cars tangled at the drop of the green, ending their evenings before they could even get to the start finish line.

On an original restart, Rayvals and Snyder got together in turn three, an incident that also sent both the No. 0 and the No. 94 pitside for the remainder of the evening and collected a luckless Shullick, who has had a nightmare first two weeks of the season.

When the field was re-racked once more, Bellinger was able to keep Danzer at bay for 31 straight laps prior to a caution flag with four laps remaining giving Danzer another shot at the race leader.

On this restart, the Bellinger No. 02 pushed way wide between turns one and two and gave Danzer an opening on the bottom part of the Speedway with Danzer taking full advantage to grab the race lead, and Bellinger falling to second.

Brandon was able to hold off a hard charging Thompson, who had passed Rayvals, Proud, Patrick, Connors, Abold, and Bruce enroute to third from his twelfth starting spot.

Danzer led the rest of the way for the win, a nice recovery from a hard crash and blown engine on Opening Night.

“I saw Brandon was getting tighter and tighter,” mentioned Danzer. “I thought if I put just enough pressure on him maybe it would make him drive in a little too hard. You really have to work to get him around him and I was going to do that as clean as I could and race him clean. I really have to thank my guys. We blew a motor here two weeks ago, bent the rear end, tore the front end out of it, and this thing was all tore apart, so I have to thank them for all the hard work, Port City Collision, and Chris Burgess, Russ Marsden for putting the engine together last week and going through it. We had good power all night.”

The next event for the Novelis Supermodifieds will be Saturday, July 2 as the 75-lap Independence Grand Prix will headline the four division spectacular for the Supers, SBS, 350 Supers, and the XMR Sportsman Modifieds. A huge fireworks display will take place at the program’s conclusion.