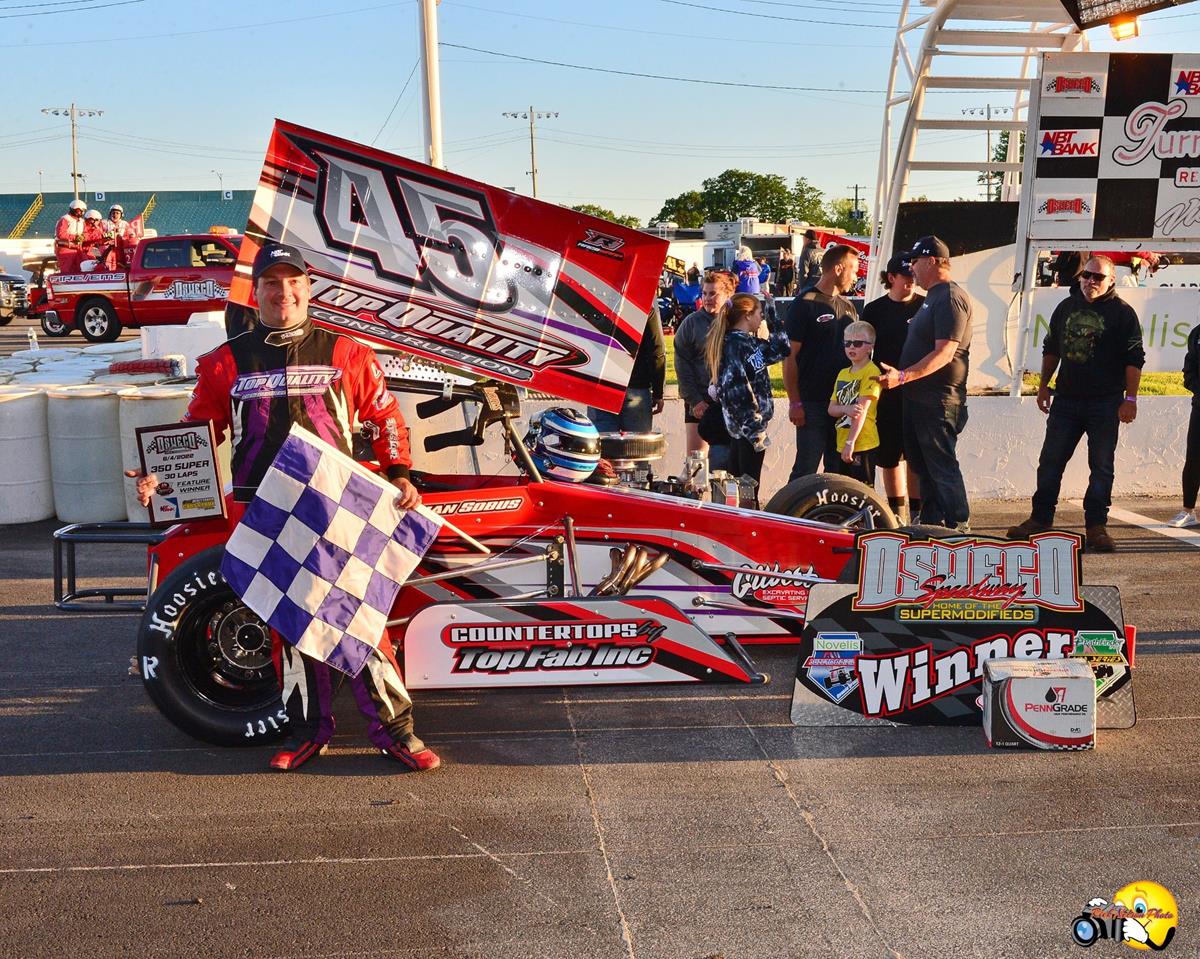 The Barbera owned machines have now swept the first two weeks of competition at the Speedway, last weekend with Bobby Holmes, and now with Sobus, who also has a pair of Pathfinder Bank SBS feature wins to his credit, plus a total of three second place runs in the Novelis Supermodified ranks.

Last weekend, it all came together for the Granby, NY driver to close the deal on his first 350 feature win in what was only his sixth start in the division.

“The car was really good tonight,” Sobus said. “Last week, the car was really good in the heat race, but terrible in the feature. This week it was terrible in the heat race, but awesome in the feature, so I will take that trade off. I have to thank all of our sponsors Top Quality Construction, Premium Construction, Colosse Cheese Store, D&S Landscaping, Top Fab, Gilbert Excavation and Septic, and Cameron’s Bakery.”

Second for the second consecutive week, was young Chase Locke, who had mounted a charge from eighth in the Locke Crane Services No. 88 for his fourth career runner-up finish at the Steel Palace.

“It was pretty good for us knowing that we can really pass on the outside going from eighth to second,” stated Locke. “It tightened up a lot near the end and I couldn’t catch up to the 45. He was really good tonight. I just want to thank my Dad, Grandpa, and brother for their help and to all of the sponsors for what they do.”

Third was a recovering Holmes, who had crashed in his heat race with Mike Bruce, but after the Top Quality team was able to make repairs, drove from ninth to third in the main event, keeping himself well in the point race with two weeks in the books.

“I kind of put us behind in the heat race,” commented Holmes. “We were just riding in the top 4, and had the 22 stick his wheel out there. I thought I gave him room, but he says I didn’t, and if I didn’t, then I apologize. I just do not know why we are racing for third and fourth in a heat when we all transfer anyway. I was half throttle that race, but that’s another story. I’ve got to say thank you to Mike (Barbera) and the whole team. They worked their butts off to get this thing together, and we made it in time for the feature and it handled great. We needed a caution and maybe for it to be tightened up a little bit more, and we didn’t get that yellow. But, a congrats to Mike again and to Brian for getting the win. That is so awesome. If we couldn’t win, I am really glad that he got the job done.”

Vern LaFave and Nick Kinney brought the field to green for the 30-lap feature event with Kinney using the outside to jump out front, as fourth starting Kyle Perry made it around dancing partner Dave Cliff on the outside to take over the third position in the early going.

Perry next went to work on LaFave, but on the move in a hurry was Sobus, who by lap 3, had already gotten by Cliff and Dalton Doyle to take over fourth.

Sobus next used the low side to pass Perry going into turn three, and quickly reeled in LaFave’s No. 97 for second.

Meanwhile; the other red car, eighth starting Locke, was also on the charge, and was soon next to get by Cliff, Doyle, and Perry, following Sobus around the outside of the Speedway.

Coming to complete lap number 5, the trio of Sobus, Locke, and now Perry were all able to work the high road around LaFave for positions two through four with Kinney still out in front.

Sobus and Locke engaged in a hard fought battle for the runner-up spot during the next several laps, but in the process reeled in race leader Kinney, with both cars going around the outside of the early leader to take over the top two spots on lap 10.

Shortly thereafter, Kinney dropped out of the race, apparently with mechanical issues.

From that point on, Sobus and Locke opened up a big distance over the rest of the field, with Locke never really able to mount a challenge on the No. 45 machine.

Chase would have to settle for yet another second ahead of Holmes, Perry, and Doyle in the top five.

The J&S Paving 350 Supermodifieds will have the night off this Saturday, June 11, but return to action on Saturday, June 18 with Twin 25-lap features held alongside the Pathfinder Bank SBS Twin 20’s.