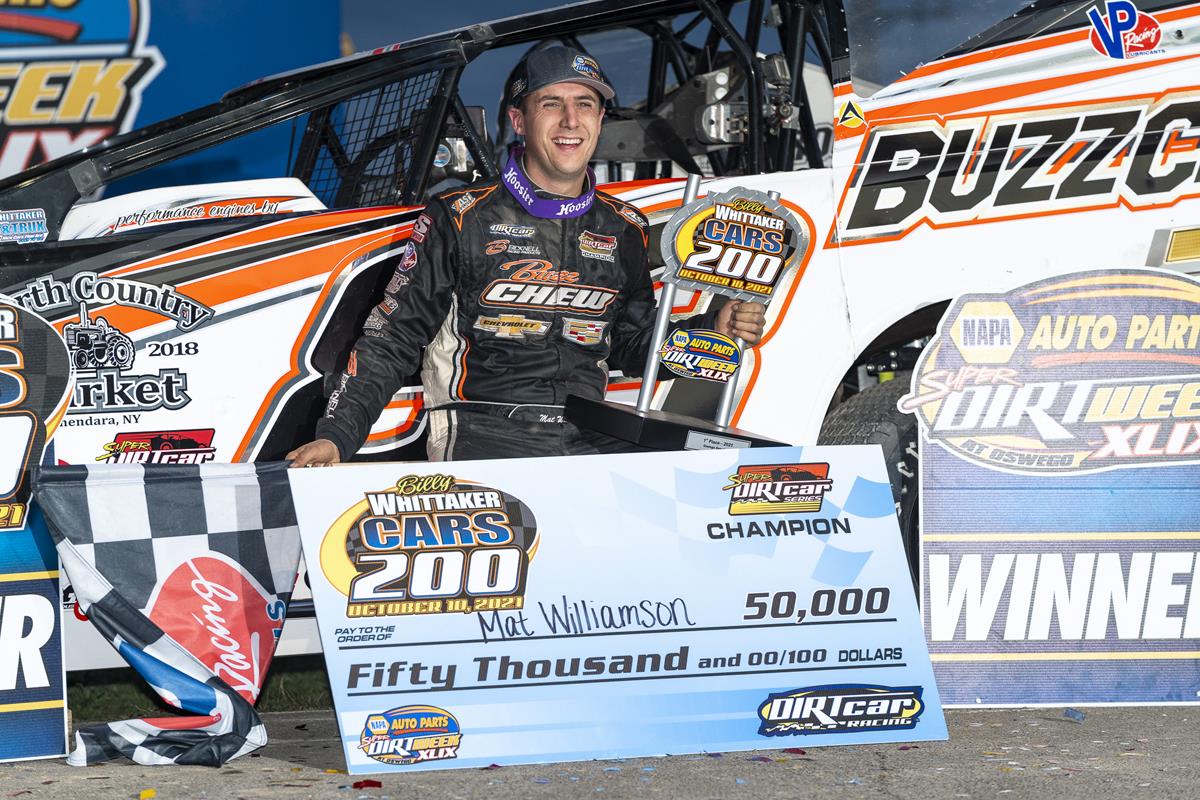 The prestigious win puts him in the same category as Stewart Friesen, Billy Decker, Brett Hearn, Merv Treichler, and Buzzie Reutimann as the only drivers to win back-to-back Billy Whittaker Cars 200s.

The Franklin Flyer Billy Decker, in the Gypsum Wholesalers #91 sped across the Oswego Speedway finish line second in Williamson’s tracks after failing to pull off a last-lap pass on the St. Catharines, ON driver.

Matt Sheppard finished third, extended his points lead, and is now well on his way to close out his record eighth career Super DIRTcar Series championship at the NGK NTK World Finals.

Oswego Speedway overlooks one of the Great Lakes, Lake Ontario, where the waters were calm and serene throughout the week. In contrast, a storm raged within the walls of the Clay Palace where 41 Super DIRTcar Series Big Block Modifieds battled door-to-door for 200 laps.

Williamson’s breakthrough moment came when leaders Peter Britten and Tyler Dippel made heavy contact out of Turn 4 on Lap 151. The seas parted and the #88 Buzz Chew Racing Big Block Modified appeared at the head of the pack where he stayed until he passed beneath Head Starter Dave Farney’s double checkered flags for the historic win.

“I don’t even know what to say,” Williamson said. “I am speechless. Everybody that’s a part of this team kept their heads down all week. Last night, we talked to Integra [shocks] on how to be better. I put my trust in them and they built four shocks that were going to survive and be good in the chop. It’s not very often that we change shock programs and win big races. They built us something that was indestructible.”

Williamson passed Britten in points and now sits tied with Billy Decker for second-place. His three Series wins this year break the tie.

“I knew this race was our only shot at moving up in the standings,” Williamson noted. “We spent all week here. We spent all night working on this thing. We welded around. We changed bolts and did everything we needed to do to make it survive. I am happy we got here.”

Like any extra-distance event, there is a certain degree of endurance needed for both driver and car. Runner-up Billy Decker used all of his skill and experience to bring home the $25,000 second-place finish and the Penske Racing Shocks Hard Charger award in the Billy Whittaker Cars 200.

“I am just trying to keep the wheels on it,” Decker said. “It was a true test of man and machine out there. There’s no question about that.”

Decker came up just short in making a run on the final lap to pass Williamson. He was happy to be in the mix at the end when it was go-time.

“Gypsum Wholesalers and Scott and the boys put together a great piece that took a 200-lap beating,” Decker said. “We didn’t quite have enough. We had a great race car. I think the pace picked up after that lap 167 restart. It was pretty much game on from there.”

Decker did all he could to get to Williamson’s rear bumper late in the race, but the Canadian sensation held him off in the end.

“I think I had a shot at Billy [Decker] but I didn’t have a shot at Mat [Williamson],” Sheppard said about his Billy Whittaker Cars 200 run. “We kind of rode around and did what we needed to do to be there at the end. We picked up the pace and they told me on the radio that I was one of the fastest cars in the last 10 laps. I pulled up on Billy and I didn’t need that last caution. We’ll take a third.”

Preparing a race car for any 200-lap Feature takes a lot of hard work and determination.

“I can’t thank my pit crew enough,” Sheppard noted. “They went over this thing with a fine-tooth comb. We knew it was going to be a challenging race. Just for this car to hold together for 200 laps is a testament to their work.”

Williamson is an intensely proud Canadian and with border restrictions still in place due to the COVID-19 pandemic, most Canadians were unable to travel to NAPA Super DIRT Week this year. To the St. Catherines, Ontario native, their absence was felt.

“There was a big chunk of people missing here,” Williamson said. “It didn’t feel complete. My close family friends, my girlfriend, my Mom, and everybody that should have been here — I miss them. I miss the fans. I miss the people that come over and tell me they are from Niagara Falls or Chatham or somewhere close to me. It’s a cool thing to have happen as a Canadian down here at Super DIRT week.”

The #21A held a firm command of the lead until 151 when Dippel came up the track and the two made contact coming out of Turn 4, resulting in them both having an issue that forced them to pit and relinquish their top-two spots.

“I am running my line. He blows it in. Knows the bumps are there and is going full throttle. Again, because he’s a moron, he drives through a massive hole and where does he end up? Right against the side of me,” said a dejected Britten, minutes after climbing out of the car. “He knows what he’s doing. He does this shit all the time. I don’t know what else to say except he’s the biggest moron in racing.”

The incident helped Williamson, running third at the time, secure his second consecutive Billy Whittaker Cars 200 title as it handed him the lead and the chance he needed to make history.

When he goes for his third consecutive win in 2022, it’ll be the 50th running of NAPA Super DIRT Week (Oct. 3-9) at Oswego Speedway. Mark your calendars now and keep watch of SuperDIRTWeek.com for tickets to go on sale.

THE FINAL LAP: Next, the Super DIRTcar Series joins the World of Outlaws NOS Energy Drink Sprint Cars and the World of Outlaws Morton Buildings Late Model Series at The Dirt Track at Charlotte for the NGK NTK World Finals (November 4-6). Get your tickets HERE or watch every lap live on DIRTVision presented by Drydene.