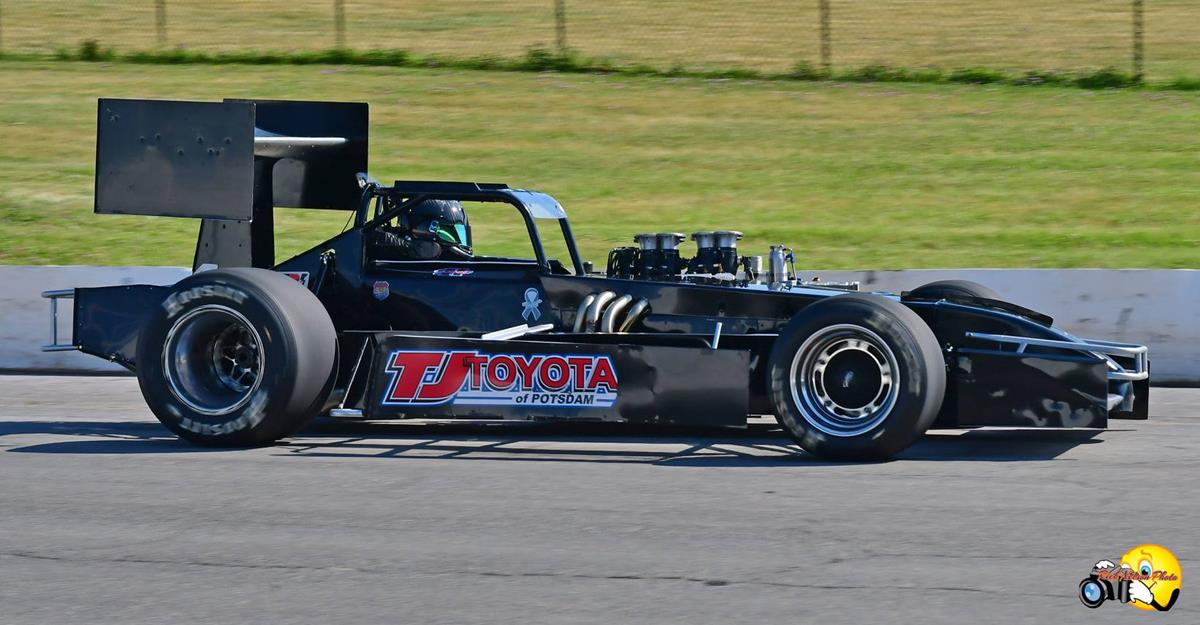 Driving the Osetek Racing No. 95, Shullick clocked in a lap of 16.411, just a tick better than Otto Sitterly’s 16.473 turned in the afternoon prior. Of the five remaining cars, Jeff Abold was the only other driver under the 17 second bracket with his 16.798 circuit posted on Friday evening.

Also participating in testing from the Novelis Supermodified division were Dave Danzer, Alison Sload, Jack Patrick, and Jerry Curran, who shook down the Nearbin Racing No. 78. The No. 52 of Danzer and 39 of Sload were quite close in lap time, with Danzer circuiting at 17.0 and Sload at 17.1, respectively. Curran turned a 17.7, while Patrick never got up to speed.

Behind Cliff, Dan Kapuscinski wasted little time getting up to speed in the bright yellow Flack Racing No. 23, which he will drive on a semi-regular basis. Kapuscinski hit 19.221, becoming the second fastest Pathfinder Bank SBS machine.

The fifth fastest of the SBS and perhaps the driver that turned the most heads, was Kartway graduate Robbie Bruce, an incoming rookie and the younger brother of Mike. Bruce had only driven go-karts prior to testing the family No. 32 at Evans Mills Raceway Park just a week ago.

In his first session at Oswego, Bruce was highly impressive, running consistent laps at 20.0 with a best time of 19.855, certainly catching the eye of those following track updates online. ‘Robbo’ will compete for the length of the 2020 Oswego Speedway schedule.

Behind Bruce was Greg O’Connor, who will pilot the renumbered No. 22 Small Block Super this season as a tribute to the Dana Family. O’Connor was only able to find 20.0 before mechanical issues brought an unfortunate end to the remainder of his test.

Ken Moody Jr. made the tow up from Clifton, NJ to take part in Saturday practice and was also sidelined early due to fuel pump issues. Moody, driving the beautiful Doug Heveron tribute No. 01, is still very new to the division having only competed in four races a season ago.

The two remaining rookies, Denny and Germain, were on track over the weekend as well, with Denny running in the high 20 second range and Germain in the 22 second range as part of his first ever Oswego laps. Both drivers looked very smooth.

A handful of J&S Paving 350 Supermodified competitors were also at the track for the sessions, and topping the lap board in the Speedway’s new class was Mike Bruce at a best time of 17.590 wheeling the Lakeside Property Services 72.

Driving the Syrell Racing ‘Iron Mistress,’ Dalton Doyle looked very sporty as well, finding 17.715 by the end of the night on Friday. Doyle won in back to back events, one of which was the first 350 Supermodified victory of his career, last season.

Cameron Rowe, a former feature winner and Classic champion in the Pathfinder Bank SBS ranks, debuted the one-time Cliff 06 Supermodified as the RBI Racing No. 77 350 Super on Sunday. Rowe seemed to adjust rather quickly turning in a best lap of 18.069.

Testing resumes on July 3 with Tim Snyder, Michael Muldoon, and Camden Proud scheduled to practice their Supermodifieds. Brian Sobus in the Schartner Racing 18, and rookie talent Griffin Miller will be on hand in the Pathfinder Bank SBS division, as well as the J&S Paving 350 Super machines of Vern LaFave and Jon Tesoriero.

Governor Andrew Cuomo’s executive order, which states that race tracks may not operate with fans in attendance, has been extended until July 21. Oswego Speedway continues to carefully follow the state and local guidelines and hopes to re-open as soon as possible in 2020.