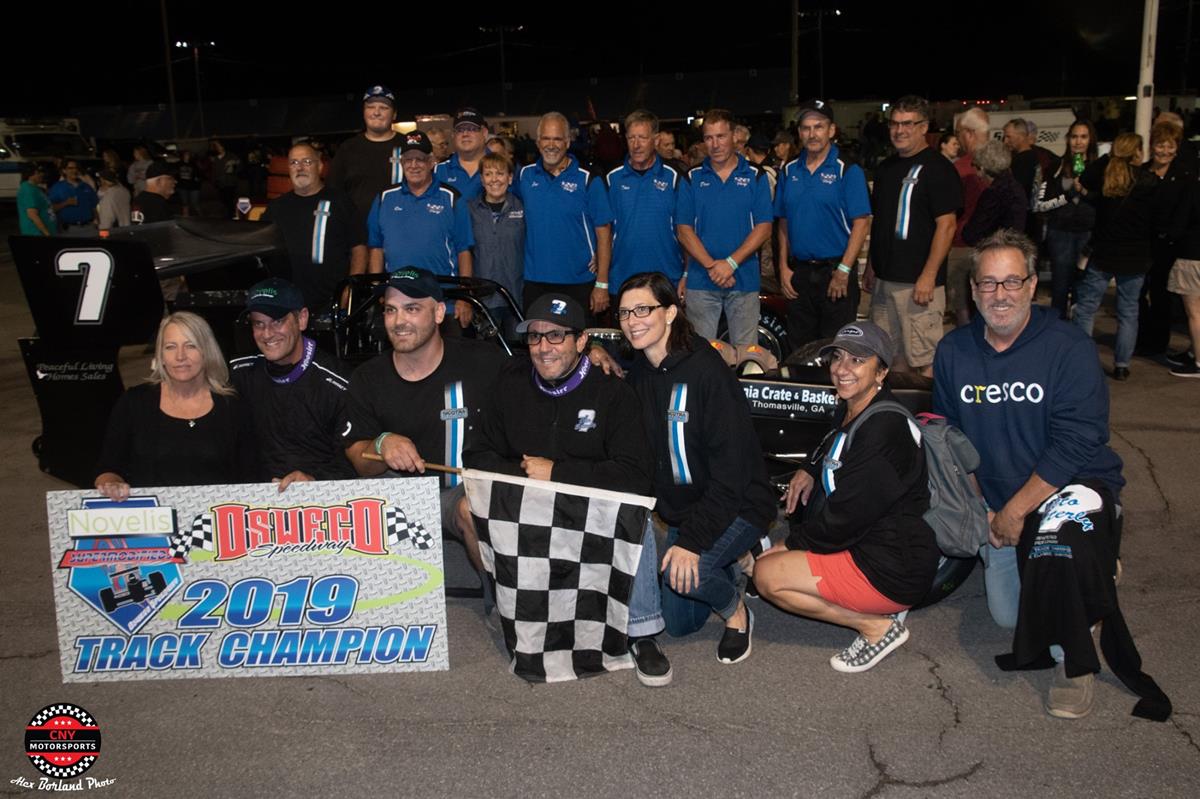 OSWEGO, NY (October 23, 2019) - Using a season of consistency which included two wins and nine top fives in twelve main events, 52 year-old Otto Sitterly from Canajoharie, NY put together another tremendous campaign in 2019 and in doing so, earned his record breaking ninth title.

Just a season ago, Sitterly had surpassed legends Bentley Warren and Jim Shampine for most Supermodified titles of all-time at eight. This year, Sitterly outdid the great Nolan Swift; who also earned eight titles between Modifieds and Supers, securing the right to be known as the ‘grand champion’ of Oswego. Now, nobody in 69 years has won more titles than Otto.

“It is obviously very meaningful to have my name mentioned with those guys,” Sitterly said. “I think winning all of these championships shows consistency, but more importantly the level of commitment from the Nicotra Racing team. I can’t say enough about all of those guys.”

“I guess it was kind of nice to have a new challenge this year,” Sitterly added. “We won the first two races with the new wing and got a third win in June which was my second of the year and no one else did that, so I guess the 7 car won twice as many races as everybody else.”

Otto, who won on May 25 and again on June 22, is in fact correct. Sitterly was one of eleven different Supermodified winners in 2019; joining the likes of Sload, Abold, Gruel, Bellinger, Shullick, Shampine, Danzer, Gosek, and Thompson, who all won no more than one regular race.

“The cars are very, very even,” Sitterly commented. “We started out good at the beginning of the year, but slowed down at the end. “We actually come with a different setup every week and did learn a few things, but later in the year was a struggle. Fortunately we got a big lead early.”

What got Sitterly that huge lead over championship runner-up Jeff Abold; who was essentially his only challenger, is again consistency. Through the first seven features, nobody passed as many cars as Sitterly, and the No. 7 car never finished worse than fifth place.

“I think winning championships certainly shows a lot of consistency,” Sitterly reiterated. “It is all about the (Nicotra) team though. Nobody in the whole pit area works as hard as these guys for all these years and it shows winning multiple titles.”

Bringing up an excellent point was car owner John Nicotra, who mentioned that Sitterly not only broke the record for most titles in Oswego history this season, but has also now won ten of the last fourteen Supermodified championships as either a driver or mechanic.

“This is very special to our team,” offered Nicotra, who is now the second winningest car owner in Oswego history behind only Shampine. “Counting the years 2006 to 2019, that’s fourteen seasons and ten titles out of Otto’s personal garage and I think that is absolutely incredible.”

“Sitting in the stands as a kid, I never thought I would even be involved let alone run for so many years and win multiple championships,” Nicotra added. “Otto always told me ‘don’t be expecting it’ and I told him ‘Why not? If you can get one, you can get ten,’ and here we are pretty close.”

The common thread that Sitterly and his car owner attribute to the longstanding success of Nicotra Racing is John’s dedicated crew who along with Otto, prepare three race cars to hit the track each and every Saturday night.

“The guys Otto has assembled are a great bunch of people,” Nicotra stated. “They all volunteer and work so hard and that means a lot to me. Nobody gets paid, everybody pays their way in, they supply all their food, and pretty much do everything. They are a loyal, dedicated bunch.”

What most may not realize is that despite all those years of having an extra car at his disposal, Sitterly never used more than one enroute to winning a title. Now, the Nicotra stable will have one less piece with 2020 on the horizon as the backup No. 6 was sold to Connors Racing.

“We’re starting to wind our inventory down,” Nicotra admitted. “I would have liked to do a deal to run the full ISMA tour one year and go for that title, but I don’t see it at this point. I think Otto and I are on the same page and we are going to play this Oswego deal out and see what happens.”

So, what’s next for Nicotra Racing? An attempt at that tenth title sounds pretty likely, as Nicotra recently announced an agreement to welcome Sload back as a full-time commitment car in 2020, leaving little doubt that Sitterly will again do the same.

“Alison and her team have committed for next year and we pretty much plan on doing the exact same thing that we did this season,” Nicotra confirmed. “If we were ever able to secure a tenth title, it would really be like that crystal ball we were staring into once upon a time.”

Sitterly and Nicotra will be honored for their track championship at the Speedway’s Hall of Fame Banquet this Saturday, October 26. Cocktail hour will be at 5pm, with dinner at 6pm, and awards to follow.